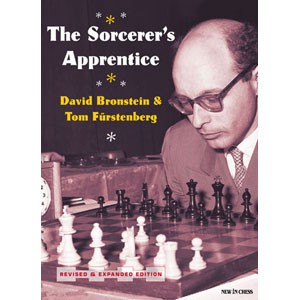 Revised and expanded editionPaperback, 384 pages, New In ChessThe first edition of this book appeared in the 90s, published by Everyman. Now we have an enlarged edition, completely re-set in high quality format by New in Chess and containing 237 games played by Russian GM and former world title challenger David Bronstein. These games were played from 1938 to 1996 – a career spanning 58 years.David Bronstein’s imagination and fantasy in chess was second to none!The extra material in this new edition consists of memorial articles by Bronstein’s wife Tatiana and co-author Tom Furstenberg, with whom Bronstein stayed whilst gallivanting around Europe in the 90s, and 32 pages of black and white photos superbly reproduced on art paper.Many of these photos date from distant Soviet times and are of historical interest. Thus we have pictures ranging from David Bronstein at four and a half months(!) of age with his parents, through the days of Soviet chess domination, right up to the last decade of his life. The photos also feature quite a few of his illustrious contemporaries, such as Keres, Smyslov, Szabo, Boleslavsky (whose daughter he married!), Botvinnik, Tal, Fischer, Spassky, etc. as well as historic tournaments and matches. In fact we are happy to admit that we have never seen most of these pictures before!After the tributes we have a 40-page chapter showing Bronstein’s brilliant combinational skill – those on the receiving end including such luminaries as Pachman, Kotov, Szabo, Keres, Botvinnik, Euwe, Geller, Korchnoi, Gligoric, Tal, Polugaevsky.Then a tribute by former world champion Smyslov on the occasion of Bronstein’s 50th birthday is followed by 50 deeply annotated games, again ranging from an Adults v Juniors tournament at Kiev 1938 to a win against Nikolic in Brussels 1996. Again we have a who’s who of players falling to Bronstein’s wizardry – but also to his technical skill. In addition to the quality of the analysis there are lengthy textual introductions which make fascinating reading and convey Bronstein’s views of his contemporaries and the places he visited.After this we have a tribute to Bronstein at the age of 60 by his friend and mentor Boris Vainstain. This leads into 60 games with no notes but with diagrams at short intervals, thereby allowing you to ‘read’ through a game without the need of a chessboard - an idea encouraged by Bronstein himself! These games range from Lipnitsky-Bronstein, Kiev 1938, to De Firmian – Bronstein, Oviedo Rapid 1993.This is followed by a 12-page article by Tom Furstenburg on Bronstein at the age of 70 – celebrated by 70 of his most ‘picturesque’ games. And still the story goes on… An interview with Bronstein, followed by nearly 30 pages of text extracted from the lecture on computers that he gave in Holland in 1996. Then comes the final chapter which gives Bronstein’s views on fast time limits “I am of the opinion that competent thinking requires only a few minutes to get the core of a conflict.”A fabulous book on a fabulous player. Even if you have the earlier printing you may wish to get this edition too - for the superb production and additional material.