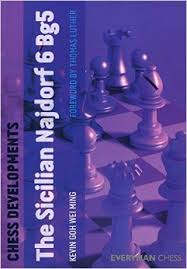 The Sicilian Najdorf is undoubtedly one of the most popular chess openings. It was played with great success by world champions Bobby Fischer and Garry Kasparov and today it remains a favourite defence at all levels from grandmaster to beginner.6.Bg5 is widely acknowledged as a critical test of the Sicilian Najdorf. It leads to razor-sharp positions and hotly debated lines such as the fascinating Poisoned Pawn, where one small slip by either side can be fatal.In this book, International Master Kevin Goh Wei Ming examines the most theoretically important and instructive games in recent years, highlighting the main developments and novelties for both sides. He includes the trendy 6..Nbd7 line, the Polugaevsky Variation, 7..Nc6; 7..Qc7, The Classical line, the Poisoned Pawn Variation with both 10.e5, and 10. f5 and the Dleayed Poisoned Pawn Variation.The 40 complete, extensively annotated games in the book explore the fantastic complexity of the 6.Bg5 Najdorf. Whether playing White or Black, this book provides you with essential knowledge of an important opening.Kevin Goh Wei Ming is an International Chess Master and six times national champion of Singapore.Published 2014, softback, 394 pages.