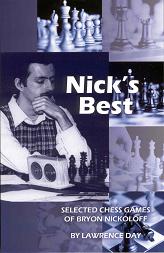 Selected Chess Games of Bryon NickoloffbyLawrence DayCanada's eccentric International Master Bryon Nickoloff was a genius at opening preparation and endgame strategy. The main reason he never became a Grandmaster was habitual time trouble with the clock. He was simply addicted to the adrenaline of time scrambles. So this book will be very educational for students of openings and endgames, but a dramatic 'cautionary tale' regarding the time-consuming search for perfection in the middlegame."Nickoloff, with an IQ of 180, whizzed through school with no mark below 95. He was one of a select group of students picked for the city's short-lived experiment in advanced independent learning. At 15, he joined a chess club at a local YMCA. 'There were 500 people there and everyone was beating me, ' says Nickoloff. 'But six months later, 1 could beat them all. ' He became 'obsessed' with the game and would play six hours a day, study chess books and famous games for another 10 hours. ..."Dave Stonehouse, Toronto Star, November 13, 1988"...there is such a thing as chess talent. It manifests as a sort of premature intuition. The player just naturally sees the right moves in complex or bizarre positions, or feels when the turning point in the game is at hand. ...Two Canadians have impressed this columnist as being more talented than the rest. One is Kevin Spraggett of Montreal, who has gone on to become a Grandmaster ...The other is Bryon Nickoloff of Toronto ..."Jonathan Berry, Globe and Mail, June 3, 1989International Master Lawrence Day of Toronto is a former Canadian Champion and 13 time member of the national Olympic team. After graduating in 1971 with an honours degree in English literature from Carleton University in Ottawa, he relocated to Toronto where he thrived as a chess player, teacher and writer. For several years he was 'Resident Analyst' for Chess Canada (a commune that supported itself by producing the magazine). Later Day wrote for magazines Modern Chess Theory, En Passant, Inside Chess as well as authoring a syndicated column distributed by the Toronto Star. He is the author of two books published in England: The Grand Prix Attack (with Julian Hodgson) and The Big Clamp which later became a collector's item. Day's first tournament game with Bryon Nickoloff was in 1972; Day was the heavy favourite but it ended in a draw. Fifty tournament games later their score remained roughly balanced, the 'Nick' slightly better at 30-minute Active, Day slightly better at regulation time. Friends as well as rivals, they both loved chess!Published by the Chess'n Math AssociationJune 2007295 pp