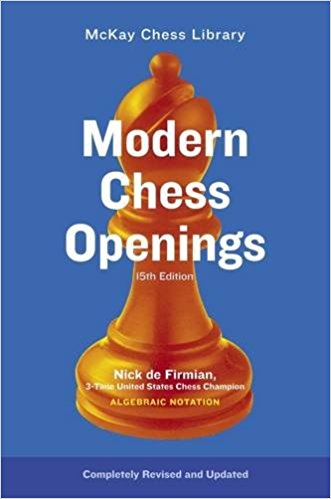 by Nick DeFirmianMCO 15, Completely RevisedThe Latest Edition of the Legendary Single-Volume Opening Manual!Modern Chess Openings is the best and most trusted tool for serious chess players on the market. First published over a half-century ago, this is a completely revised and updated edition of the book that has been the standard English language reference on chess openings. An invaluable resource for club and tournament players, it now includes information on recent matches and the most up-to-date theory on chess openings.Modern Chess Openings is ideal for intermediate players ready to elevate their game to the next level or International Grandmasters who want to stay on top of recent chess innovations.“User-friendly, up-to-date and reliable – the best book of its kind.” – Bruce Pandolfini“De Firmian knows how to present material in an instructive and digestible manner…that all levels can benefit from.” – Joel Benjamin, Chess Life“A must for every tournament player.” – Larry ChristiansenAbout the AuthorAmerican grandmaster Nick de Firmian is one of the world's leading expert on chess openings. He has represented the United States in seven Chess Olympiads and three World Championship cycles. His previous written works include the 13th edition of Modern Chess Openings, San Francisco 1995, Chess Openings the Easy Way and The English Attack (with John Fedorowicz), as well as many articles for the official magazine of the U.S. Chess Federation, Chess Life. A graduate of UC Berkeley with a degree in physics, de Firmian is a native Californian who now resides in Copenhagen, Denmark with his wife and son.768pp. (2008 David McKay)