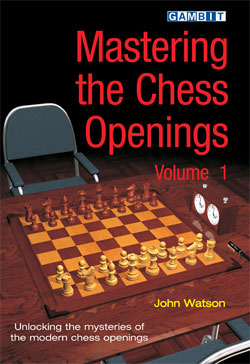 byJohn WatsonPaperback: 288 pagesPublisher: Gambit Publications (October 1, 2006)#ISBN: 1904600603This is an opening book with a difference. Most opening books follow a common pattern, in which the ideas behind each variation are discussed to a greater or lesser extent, and then a great deal of detailed analysis is given. There are variations on this theme, for example some books give a complete coverage, while others take just one player’s point of view, but the basic concept doesn’t vary much.Watson’s book offers a quite different approach, which is to familiarise chess players with the ideas that underlie the openings. Such a concept has been used before, but Watson takes it to a more sophisticated level, offering not only a detailed description of plans and ideas on an opening-by-opening basis, but also emphasising the interrelations between one system and another. We know we are in for something different when the first few chapters, up to page 86, describe the general principles of opening play without considering any particular opening in detail at all. Watson’s earlier books, such as Secrets of Modern Chess Strategy, have established a reputation for explaining fairly advanced concepts in simple terms, and that reputation will be preserved by these early chapters. We learn how opening ideas often apply not only to one particular opening, but across a whole range of openings, establishing a thread which Watson picks up at various stages of the book.After these elementary chapters, we move on to cover each opening in more detail. This first volume covers everything after 1 e4; the second volume, due to appear in February 2007, will deal with all the other openings. In each chapter, the basic plans and ideas behind the particular opening are described in detail, sometimes using illustrative games. Some detailed analysis of critical lines is presented, but this is not intended to be comprehensive; rather it aims to show how the general themes play out in concrete lines.This book is recommended for those who like to focus on understanding openings rather than memory work and those who have little time to study opening theory; just don’t expect detailed analysis of every line.