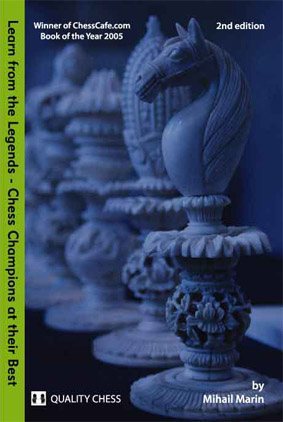 byMihail MarinPaperback: 344 pagesPublisher: Quality Chess; Revised edition (June 30, 2006)ISBN: 9197524484It is well known that every World Champion has contributed to the continuous development of chess thinking and strategy. Symbolically it was the first World Champion Wilhelm Steinitz who founded modern chess with his groundbreaking thoughts about positional chess as governed by a set of laws, and not only the brilliance of individual players.A later World Champion, Jose Raul Capablanca, explained that the study of the endgame is not only relevant to the endgame, but to chess in general. In the endgame we can study each piece in its pure form and gain a more intimate understanding of their individual properties. This understanding will benefit the active chess player in every part of the game. It is no coincidence that the highly successful trainer Mark Dvoretsky focuses strongly on studying the endgame.In this ambitious work Mihail Marin examines and explains the contribution from the chess legends who influenced him strongly in his own development. This personal and sympathetic journey into the best chess of yesterday is guaranteed to help the readers in their games. As we all know: those who do not learn from history are doomed to repeat it. The chapters in this book discuss:

Mihail Marin is a strong Romanian Grandmaster. His talent for clear explanations was noted in the chess world on the publication of his first book, Secrets of Chess Defence, in 2003. He has also previously published opening CD’s for Chessbase. This is his first book for Quality Chess.
General
English