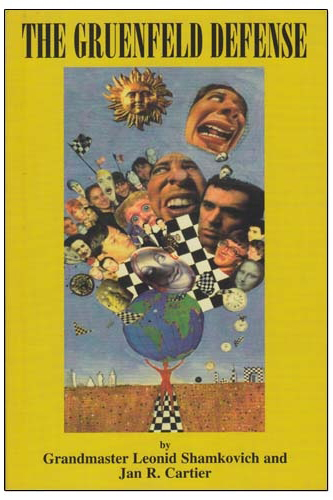 Named for Ernst Grünfeld, who introduced it into international tournament play at Vienna 1922, where Grünfeld, in his first game with the defense, beat future World Champion Alexander Alekhine. The opening relies on one of the main principles of the hypermodern school, which was coming to the fore in the 1920s — that a large pawn centre could be a liability rather than an asset.The defence was later adopted by a number of prominent players, including Vasily Smyslov, Viktor Korchnoi and Bobby Fischer. Garry Kasparov often used the defence, including in his World Championship matches against Anatoly Karpov in 1986, 1987 and 1990, and Vladimir Kramnik in 2000.Shamkovich became a Grandmaster in 1965 and won several tournaments, with his best victory coming at Sochi in 1967, where he tied for first place with Nikolai Krogius, Vladimir Simagin, Boris Spassky and Alexander Zaitsev. Other notable results included a tie for 3rd at the 1962 Moscow Championship (behind Yuri Averbakh and Evgeny Vasiukov) and finishing third at Mariánské Láznì 1965 (behind Paul Keres and Vlastimil Hort). Shamkovich left the Soviet Union in 1975, moving first to Israel, then Canada, and finally the United States, where he settled. He won the 1975 Canadian Open Chess Championship. He continued to play through the 1990s, and wrote several chess books.