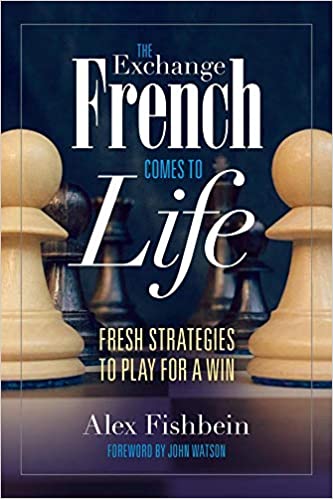 In the first book ever exclusively devoted to the Exchange French Variation, American grandmaster Alex Fishbein recognizes that the Exchange French is an opening for a player who likes active piece play, fights for the initiative, excels in positions with possibilities on both sides of the board, and finds strategic and tactical nuances that arise out of almost nothing. And if you play the French as Black, then this book will help you deal with White’s 3.exd5.
Authors of French Defense books from the black perspective have recognized for a while that there is no draw here at all and have proposed lines where Black can create interesting play. Indeed, both sides can create complications. The author shows that playing “boring” moves is actually risky with both White and Black. The Exchange French is a vibrant opening, just like any other, and yet there has been very little literature showing how to play it from the white side. That void is filled with this book.
"While the main point of this book is to build a White repertoire, any player of the Black side of the French will benefit by reading it. A good number of the sample games end well for Black, whereas in the games in which White gains the upper hand, Fishbein is careful to note improvements for the second player. I have been playing and writing about the French Defense, including this variation, for many years, but I came across a lot that I hadn’t known in nearly every sub-variation.
“I suspect that most readers of this book will be pleasantly surprised to find out how rich the play can become in the French Exchange Variation. That alone is enough to reward a careful reading, and Fishbein’s careful exposition of lines and strategies will undoubtedly translate into extra points over the board." – from the Foreword by John Watson