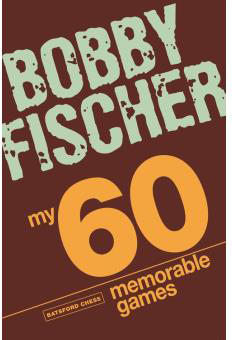 byBobby FischerNOW AVAILABLE!When American Bobby Fischer (1943-2008) won the world title from Russian Boris Spassky in 1972, at the height of the Cold War, it not only resulted in fantastic worldwide media interest but also in a record number of people being introduced to the game of chess.However it had taken Fischer many years of hard study and fiercely competitive tournament practice to perfect his all-round style of play and achieve his life’s ambition – despite having spectacularly gained the grandmaster title and qualification to the World Championship Candidates tournament at only 15 years of age.My 60 Memorable Games was written over a period of several years and contains Fischer’s objective, honest and self-critical annotations to games that he had won, drawn and even lost from 1957 to 1967 – but from which he had also learned valuable lessons. In fact, reading Fischer’s intensely personal commentaries is like going back in time, watching live coverage of his over-the-board battles with the chess greats of his day. Soon he would become the greatest of them all.Over the years this most influential and inspirational book has been translated into various languages and with varying degrees of accuracy. There was even an algebraicised English edition in the mid-90s, utterly condemned by Fischer for its errors and hundreds of unauthorised changes. However, in the new reissue you will find only Fischer’s original text and analysis as given in the first edition published in 1969. Even the typography and page layout resembles the original.Fischer’s influence will be around for a long time to come. Young players around the globe are still fascinated by his personality and breathtaking will to win, while even his method of evaluating positions serves as a basis for the strongest present day chess computer program.The brand new edition of My 60 Memorable Games will serve as a celebration of Bobby Fischer’s genius, dedication and professionalism which elevated chess to the highest level of sporting competition.In contrast with the previous edition of this book, no alterations have been made to the text other than the conversion of moves into algebraic notation, making this an updated yet accurate reflection of the original book.