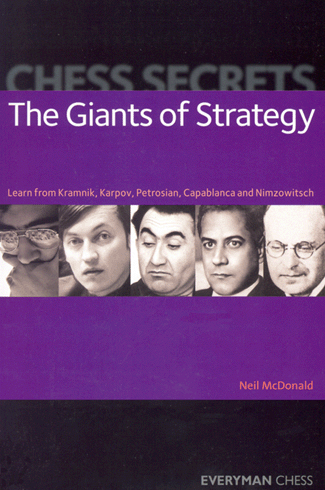 byNeil McDonaldLearn from Kramnik, Karpov, Petrosian, Capablanca and NimzowitschChess Secrets is a brand new series of books which uncover the mysteries of the most important aspects of chess: strategy, attack, opening play and gambits, classical play, endgames and preparation. In each book the author studies a number of great players from chess history who have excelled in a particular field of the game and who have undeniably influenced those who have followed.The chess world has been blessed with some wonderful strategists, innovators of the game with their instructive play and profound teachings. In The Giants of Strategy, Neil McDonald chooses his selection of the most prominent ones and highlights the major contributions they have made. He examines their differing approaches and styles, and from Nimzowitsch to Kramnik, how they followed in each other's footsteps. A careful study of this book will help you to understand and improve in one of the most crucial elements of the game.An entertaining and instructive guide to chess strategy Learn from the greats of the game Discover how famous chess minds work256pp. (2007 Everyman Chess)