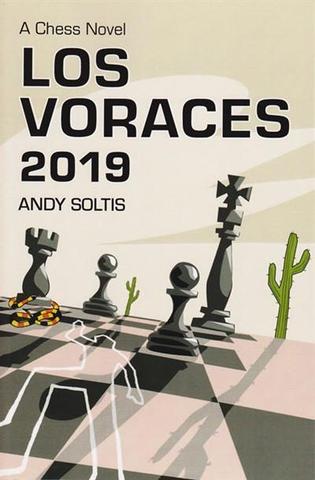 Los Voraces 2019, A Chess Novel. The rules of "The Greatest Tournament in Chess History, the $20 million Sheldrake Memorial Tournament, a.k.a. Los Voraces 2019, are: no seconds, no agents, no computers, no entourages, no pagers, no power palms, no phone calls, no outside contact of any kind, as the fourteen greatest chess players in the world gather to compete for money and fame. These geniuses of the game are strange characters, including two Russian world champions solely responsible for article 17.1 of FIDE's Laws of Chess (the "anti-hair-pull rule"), the Rumanian who speaks a kind of personal Esperanto, using odds and ends of other languages, and a possible member of the Russian mafia,and when the tournament begins with the death of the ninth highest rated player in the world, everyone is under suspicion.

This fabulous chess novel is full of game scores and diagrams, some pretty amazing games are played at Los Voraces! It's all told from the point of view of the arbiter, who is quickly drawn from his role as observer to that of target and suspect. By the time the tournament has only five rounds to go, five corpses have been discovered. Just who is the serial killer with a preference for 2700-rated grandmasters? This edition is a revision, with illustrations, of a serialized electronic version run by Hanon Russell on ChessCafe from September 2001 to September 2002. Illustrations, tables, index, and drawings. Drawings by Linda Campbell Franklin.