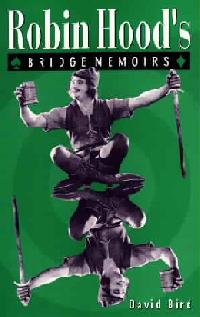 by David BirdDavid Bird rightly received many plaudits for his fine series of books describing the Bridge playing antics of the fictional monks of St.Titus Abbey. His Robin Hood series appears to be an attempt to broaden the franchise and, as is often the case, he has brought in others to assist with this while still keeping the David Bird badge on the cover. In this book, many of the hands were devised by Tim Bourke with the author adding his humour and general style. This book follows the format of "The Bridge Adventures of Robin Hood" in that most of the hands described take place in a rubber bridge setting and they are of a different character to those of the Abbot series. Published 1997 - Batsford144 pagesISBN 0713482451