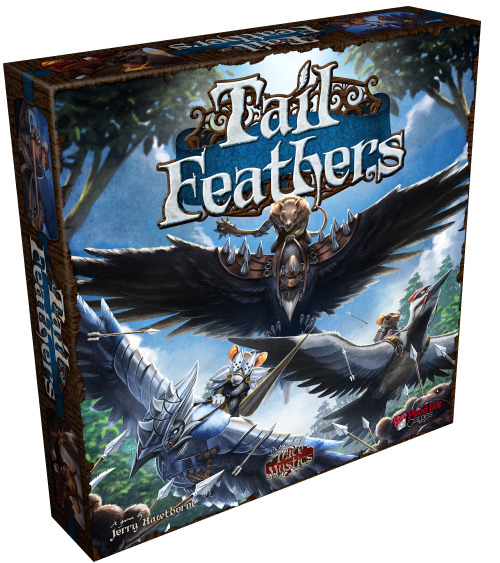 Villainous rats have allied with vicious hunting birds to pillage the humble mouse settlement across Meanderfield. But look! Brave mice, mounted on starlings and blue jays, swoop in to wage war against this evil alliance! The Downwood Militia soars into action against the Vermin Raiders!Plaid Hat Games proudly presents Tail Feathers, the exciting new miniature skirmish game by our very own Jerry Hawthorne set in the beloved world of Mice and Mystics. Soar across the table, send your troops on dangerous missions, lock beaks with opposing birds, and defend your nest!setupFeaturing the beautiful hand-sculpted miniatures by Chad Hoverter Mice and Mystics fans have come to love, Tail Feathers raises the stakes with 13 dutiful ground troops, 5 headstrong birds that tilt for launching and turning, plus 5 daring pilots. Players will recreate the famous battles for aerial supremacy that shaped the Mice and Mystics world.Outwit and outfly your opponent in stand-alone scenarios, or play a full campaign and see your units gain skill from one battle to the next.cardsTail Feathers is a stand-alone game, not a Mice and Mystics expansion, but you can use your Mice and Mystics: Sorrow and Remembrance miniatures in Tail Feathers right out of the box.