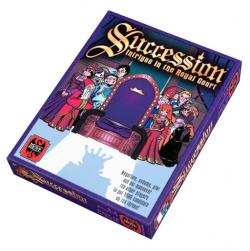 Succession ends when the aging King chooses a successor to the throne. Of all the worthy citizens of the land, the King has narrowed his choice to five candidates. You are not one of them. As a courtier, master of palace politics, you will manipulate the King's opinion of the candidates through intrigues -- bits of gossip, good and bad reports, etc. Just as important, by claiming credit for things you may not have done and avoiding blame for things you probably did you'll manipulate the opinions of the candidates. That way when the King makes his selection you're set to be the power behind the throne rather than the next court jester. Featuring fifteen pieces of original art by Phil Foglio and graphic design Kaja Foglio.