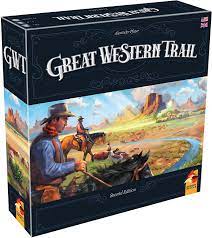 The second edition of Great Western Trail includes solitaire rules, making for a player count of 1-4.

Second Edition:
Remember the old days in the West? Well, the times they are a-changing’! From new solo opponent to incredible landscapes, you won't know where to start. And there is a new herd of cows for you to sell!

Great Western Trail is the critically acclaimed game of cattle ranching by Alexander Pfister. Players attempt to wrangle their herd across the Midwest prairie and deliver it to Kansas City. But beware! Other cowboys are sharing the trail with you. We invite you to saddle up!

The changes in the Second edition: