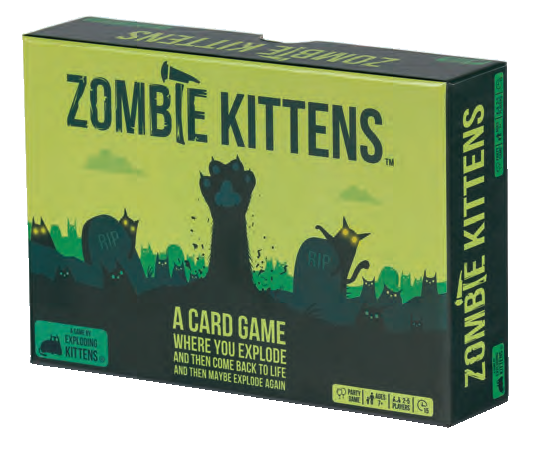 A card game where you explode and then come back to life. And then maybe explode again.

Give "nine lives" a whole new meaning. In Zombie Kittens, exploding just means you'll have a chance to rise from the grave and take your revenge. Bring back your friends (and enemies) in this undead spin on your favorite Russian Roulette style kitten card game.

Play with up to 5 players or combine with any other version of Exploding Kittens to unlock new ways to play
Play cards from the grave - if you explode you can still play while you're dead!
The new special Zombie Kitten card gives you the power to bring dead players back into the game
An undead twist on the original Exploding Kittens that keeps every player involved in the game, dead or alive, until the very end. The last player alive wins
Play Zombie Kittens on its own or combine with Exploding Kittens to unlock a mega game
Family friendly party game with hilarious illustrations by the Oatmeal