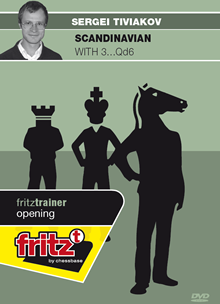 The Scandinavian with 3...Qd6 could just as well be called “The Tiviakov System”. The grandmaster who was born in Russia and who now has an ELO-rating of 2623 has been working with this plan for many years and has successfully employed it against 1.e4-players of all calibres, both against weaker title-holders and also against World Champion Vishy Anand. On his new DVD Sergei Tiviakov shows you everything you need to know in order to be able to play 3...Qd6 yourself at once. Because he not only presents you with all the important variations and plans for Black but at the same time he does not omit a single one of White’s possible side variations on move 3. And the DVD comes with a special sweetener, namely a collection of all the author’s games with the Scandinavian, including many which had absolutely not been published until now. Video running time: 4 hrs. 16 min.