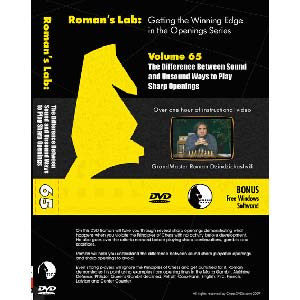 Running time over two hours On this DVD Roman will take you through several sharp openings demonstrating what happens when you violate the Principles of Chess, specifically no activity before development. He also goes over the criteria needed before playing sharp continuations, gambits and sacrifices. Roman will help you understand the difference between what is considered sound sharp playable openings and sharp openings to avoid. Even strong players will ignore the principles of chess and get punished for it. Roman demonstrates his point using examples from opening lines in Morra Gambit, Alekhine defense, Philidor, Queens Gambit declined, Petroff, Caro-Kann, English, Pirc, French, Latvian and Center Counter