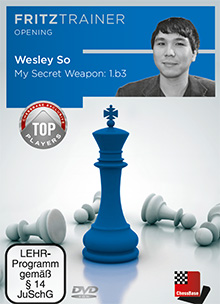 The Nimzowitsch-Larsen Attack with 1.b3 (or 1.Nf3 followed by 2.b3) is a system, rather neglected by theorists, which nevertheless can be a forceful weapon in the hands of an ambitious white player. Even Bobby Fischer tried this opening in various games, sometimes preferring it to his beloved 1.e4, and its greatest advocate was the legendary Danish fighter Bent Larsen. Meanwhile, 1.b3 has also found its way into the practice of today’s world elite, and now finally a modern top ten player has taken on the subject for ChessBase: none other than Grandmaster Wesley So!

In a total of nine video clips, So talks to IM Oliver Reeh, explaining his view of White’s strategy after the four main replies bv Black: 1...e5, 1...d5 (2.Nf3!), 1...c5 and 1...Nf6. Often, play transposes to openings like the Queen’s Indian or the Nimzo Indian with reversed colours where White simply is a valuable tempo up. Also possible are transitions to the English where once again the move 1.b3 proves very advantageous to White — his bishop will always be the first to appear on the long diagonal! Apart from plans and ideas in the individual variations after 1.b3, this DVD provides insights in the personal thinking of a modern top grandmaster. For example, you’ll get to know that So particularly appreciates the bishop pair, but also enjoys enemy doubled pawns (after for instance, Bb2xNf6!). Positional understanding and opening knowledge go hand-in-hand, imparted by one of the great players of our time. Broaden your chess mind with GM Wesley So and 1.b3!