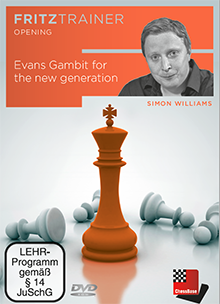 This romantic and exciting opening is named after the Welsh Sea Captain William Davies Evans who tried it first. The Evans (which arises after 1.e4 e5 2.Nf3 Nc6 3.Bc4 Bc5 4.b4!?) is an attempt to destroy Black in gambit fashion straight out of the opening and giants of previous years such as Adolf Andersson and Paul Morphy played lots of brilliancies with it. But the Evans Gambit has stood up to the test of time and in the modern era players such as Nigel Short, Garry Kasparov, Baadur Jobava, Hikaru Nakamura or Wei Yi have tried it with success. This DVD will prove that the gambit is still fully playable and a great way to try and blast Black away right from move one. Featuring games of old, and numerous new and exciting ideas, this DVD will give you a genuine and more exciting way of playing the Giuoco Piano.