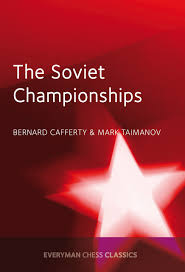 byCafferty & Taimanov.Starting in the early 1920s and running through to the early 1990s, when the political break-up of the USSR meant the end of the competition, the prestigious Soviet Championships were truly representative events with all of the top Soviet players participating. Because of the enormous state support for the game in the old USSR, these championships were usually gladiatorial, all-play-all contests lasting weeks, and the grandmasters represented the elite of World Chess. Alekhine, Bronstein, Tal, Petrosian, Korchnoi, Geller, Stein, Spassky, Karpov, and Kasparov were all winners at least once, and the tournaments have gone down in legend for the quality and creative inspiration of the games. This book is a permanent record of these extraordinary times. It encompasses every single Championship, giving a report and the full cross-table of results, as well as a carefully chosen selection of games. The annotations bring to these extraordinary and instructive struggles to life; many important chess ideas and concepts were first discovered in these games. The introductions to each Championship are equally fascinating, as the majority of these tournaments were played against the oppressive political backdrop of Communism. Revered chess masters could get away with more than most, but veiled threats by authorities were always there for those who might consider stepping out of line. FAN. 222 pages. Everyman Chess Classics