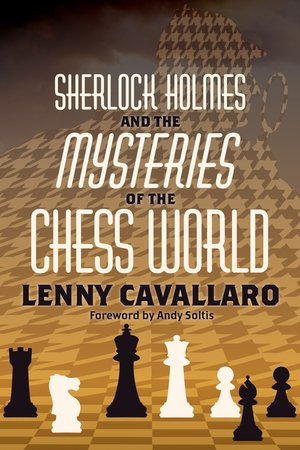 The origins of the Royal Game go back centuries. And throughout its diverse and multi-faceted history, controversies and mysteries have arisen. Some have been resolved; many have not.

Did Alekhine really succumb to a piece of meat that was stuck in his throat? And Paul Morphy passed after a walk on a hot New Orleans afternoon? What if the great Sherlock Holmes – and his successors – applied ironclad logic to these and other instances of Caissa’s conundrums? Might we be closer to sorting out the truth?

You are invited to join Holmes, Watson and their descendants as they focus their investigative skills on seven decidedly curious cases from the chess world. Premature deaths. Strange games and match results. And more...

Author Lenny Cavallaro has channeled his creative passion for chess into this wonderfully entertaining collection of short stories featuring Sir Arthur Conan Doyle’s legendary Sherlock Holmes and Dr. Watson. And if you have not already realized it, you may discover that the chess world is indeed a strange enigma.

About the Author
Lenny Cavallaro is an accomplished musician, composer, and author. He earned his B.A. at the University of Connecticut and later earned his Doctor of Musical Arts (D.M.A.) degree from West Virginia University. He has served on the English and/or music faculties of several colleges in New England. A hapless woodpusher, he has nevertheless written about chess on numerous occasions and co-authored Superstition and Sabotage with Viktor Korchnoi. This is his first book for Russell Enterprises.