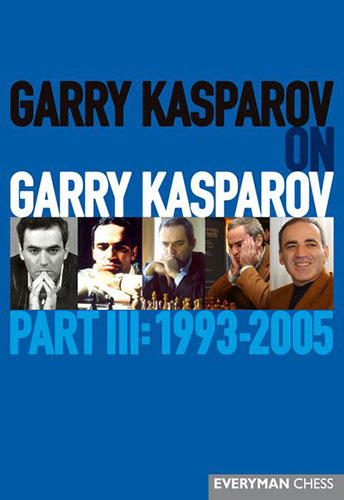 Garry Kasparov on Garry Kasparov: Part III is the final volume in a major three-volume series made unique by the fact that it records the greatest chess battles played by the greatest chessplayer of all-time.Kasparov’s series of historical volumes have received great critical and public acclaim for their rigorous analysis and comprehensive detail regarding the developments in chess that occurred both on and off the board.The first two volumes in this series saw Kasparov emerging as a huge talent, toppling his great rival Anatoly Karpov and then defending the World Championship title on three occasions. This third volume focuses on the final 12 years of Kasparov’s career up until his retirement from full-time chess in 2005.This period witnessed three further World Championship matches: wins against Short (London 1993) and Anand (New York 1995) before the loss against Kramnik (London 2000) which finally ended Kasparov’s 15-year tenure as world champion. This period also saw Kasparov achieve a colossal 2851 rating (1999), a record which stood until 2013. Despite the loss of the World Championship, Kasparov continued to be ranked as the world number one and dominated the elite tournament circuit. He won the Linares super-tournament for four consecutive years (1999-2002) with the fourth of these victories in 2002 concluding an unprecedented run of ten straight wins in the world’s elite events (Linares 4, Wijk aan Zee 3, Sarajevo 2 and Astana 1). The games in this volume feature many masterpieces of controlled aggression played against the world’s absolute best.