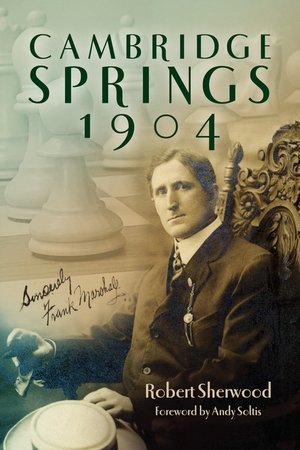 In the spring of 1904, most of the chess world’s elite gathered in the sleepy northwestern Pennsylvania town of Cambridge Springs, where the first great tournament of the twentieth century was to take place. World Champion Emanuel Lasker topped the field. The champions of America (Harry Pillsbury), Russia (Mikhail Chigorin), France (David Janowski) and the Austria-Hungarian Empire (Carl Schlechter) were also playing.

Among the other players in this historic fifteen-round-robin event was a young master from Brooklyn, Frank Marshall. He had some international experience, including defeating World Champion Lasker in their individual encounter at Paris in 1900. However, he certainly was not considered among the favorites at the time. Nevertheless, Marshall finished in first place, two full points ahead of the rest of the field, the only undefeated player.

The story of this great tournament is superbly told by author Robert Sherwood. Each game is deeply annotated, while contemporary sources and rare archival photos nicely supplement the round-by-round account.

With this victory, Frank Marshall took his place among the world-class players of his era. You are invited to join Marshall on his journey in this splendid account of his magnificent triumph in the first major international tournament of the twentieth century.

Robert Sherwood started playing chess and reading about the game in the early 1960s, playing in tournaments at the expert level. College interrupted his tournament play. He then returned to the game as a lover of chess history, assembling a library of titles on the legendary players of the past and their tournaments. When not involved with chess Bob is a contract writer, editor, and German-to-English translator working in a wide range of areas. He lives with his woman friend and animals in Dummerston, Vermont.